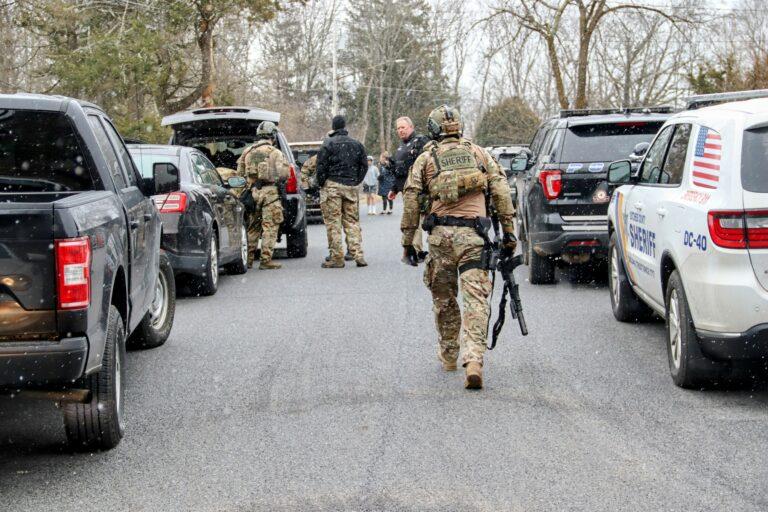 TOWN OF POUGHKEEPSIE – A 28-year-old man has barricaded himself in a home on Pleasant View Road in the town after members of the Dutchess County Sheriff’s Office (DCSO) tried to serve a legal eviction on Wednesday morning.  The barricaded subject allegedly brandished a shotgun at law enforcement, triggering a large police response. Residents in the area of Pleasant View Road and Dutchess Turnpike/Route 44 are being encouraged to remain inside of their homes.

The incident began just after 9:00 a.m. when the DCSO attempted to evict Shawn Maggiacomo and his mother from the house they reside in.  The subject had been party to an eviction proceeding because the house is part of an estate that is being liquidated.  When law enforcement arrived along with the men hired by the landlord to remove the belongings, Maggiacomo allegedly brandished a shotgun and refused to exit.  Law enforcement retreated to a safe area and called for assistance, bringing a large contingent of police from multiple agencies to the scene just off of Dutchess Turnpike/Route 44 near the Pleasant Valley town line.

The subject was barricaded in the house with his mother, who is deaf.

“They’ve got automatic M-4s and a bunch of other equipment out here.  They will shoot you if you threaten them,” the brother told Shawn.  “Put the gun down and come to the front door and they will arrest you,” the brother pleaded, adding “Please…do it for mommy…and me…nobody wants you dead.”  Moments later, the phone connection was lost.

The brother and landlord were interviewed by law enforcement and provided police with a diagram of the interior of the dwelling, noting all access points.  A DCSO drone was deployed overhead to give the incident commanders an aerial view of the scene.  An emergency services robot was observed being prepped by police for deployment.

As of 10:30 a.m. the incident was ongoing and police were still seeking a peaceful resolution to the hostage scenario.

Video of the subject’s brother providing schematics of the house on Pleasant View Road: